With over 40 miles of stunning coastline, 30 spectacular castles, 22 golf courses, and some of the best seafood (and whisky!) in Scotland, East Lothian might be on Edinburgh’s doorstep but it really is a destination in its own right.

Here are my favourite things to do in East Lothian.

The 134-mile John Muir Way is an east coast to west coast long range walk named after the famous Scottish conservationist and naturalist. East Lothian’s section is over 40 miles, stretching from Prestonpans to Dunbar. My favourite part of the route passes through Aberlady, Gullane and North Berwick, along the beautiful coastal path. Find out more about John Muir at his birthplace in Dunbar.

2/ Visit the seaside at North Berwick

Head to the beautiful seaside town of North Berwick for a stroll on the beach, a picnic lunch of freshly cooked fish, and if you are lucky a huge ice cream. To get to North Berwick, just hop on the train from Edinburgh and just 30 minutes later you will be strolling down through the town. North Berwick has two beaches – the huge sweep of the West Beach or the  family friendly East (or Milsey) Bay with its boat pond, which is more usually used these days as a precarious running track and views to Bass Rock. Read more: Things to do in North Berwick. 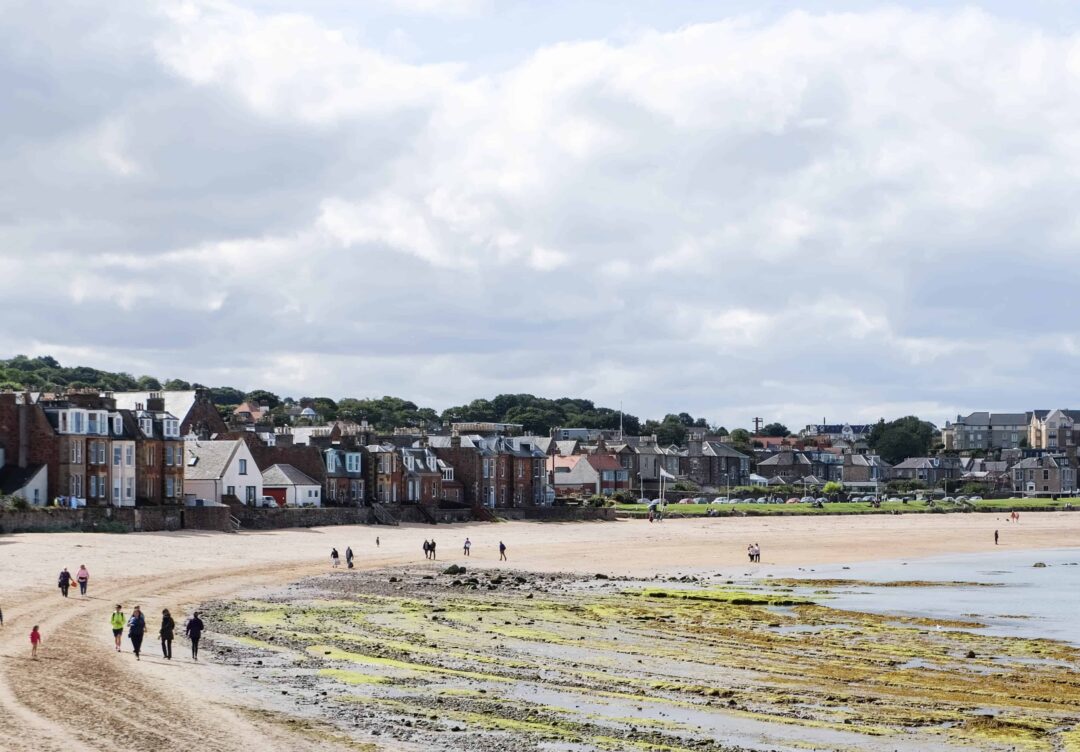 North Berwick is one of my favourite weekend haunts – and a great place to grab fish and chips and have a stroll on the beach. For a more luxury treat than the typical fried fish head down to North Berwick Harbour where you will find the Lobster Shack where chips are served with fresh North Berwick grilled lobster – and even served with champagne! Take your seat on the harbour wall and dig in. If the Lobster Shack is closed, The Rocketeer also does a great takeaway and has blankets to sit on out on the lawn.

Fans of time-travelling TV series Outlander should visit Lallybroch’s Mill (from season 1, where Jamie goes for a swim, Mr Darcy style) which is Preston Mill & Phantassie Doocot, managed by the NTS. Whilst the Battle of Prestonpans (from Season 2) is not filmed on location, the 1745 Heritage Trust stages annual reenactments of the Jacobite battle across East Lothian on the weekend of 23/ 24/ 25 September.

5/ Look For Fairies At Archerfield

The Archerfield Estate sits between the villages of Gullane and Dirleton and offers up a luxury hotel, spa and links golf club. In the grounds of the estate is Archerfield Walled Garden a cafe, shop, children’s play area, a regular street food market and the Archerfield Fairy Trail, a collection of fairy houses hidden in Archerfield Wood which kids love.

The sand dunes, mudflats and salt marshes of Aberlady Bay were designated a local nature reserve in 1952, and are home to over 550 plants, wading birds and in summer, 30,000 pink-footed geese. There are extensive paths through the reserve, all leading down to the beach. On low tide, you can also spot the remains of two midget submarines. Read more about Aberlady Bay. 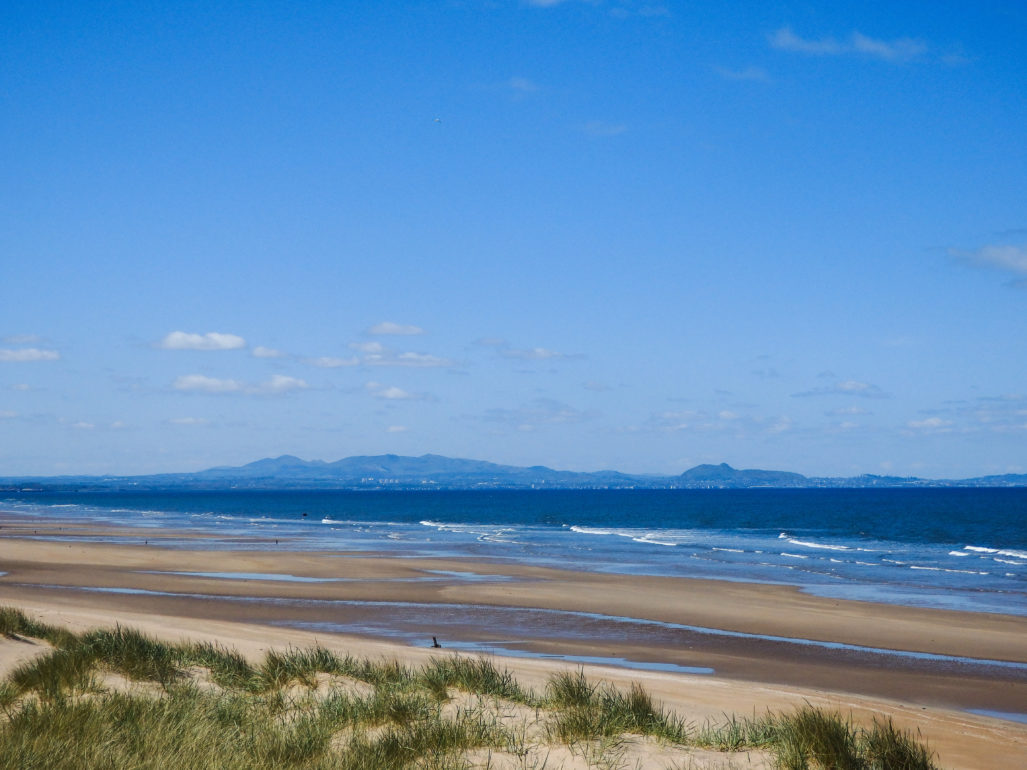 7/ Find Scotland’s Concorde at the Museum of Flight

The Museum of Flight at East Fortune houses over 40 military and civil aeroplanes, in historic RAF hangars. The biggest attraction is the supersonic Concorde, although you can also step inside a Boeing 707. There are exhibitions on throughout the year, including a spectacular airshow in July. Admission is £12 for adults, £7 for children and family tickets are £31.

The Firth of Forth is home to the biggest Northern gannet colony in the world and you can learn all about them at The Scottish Seabird Centre at North Berwick. With 14 cameras on Bass Rock, the Isle of May, Craigleith Cliffs, Dunbar Harbour and Fidra Island, as well as burrow cams, you can also watch the biggest puffin colony on the east coast of Britain as well as guillemots, razorbills, shags, fulmars and kittiwakes. Get up close and personal with a boat trip along the Forth from the harbour. 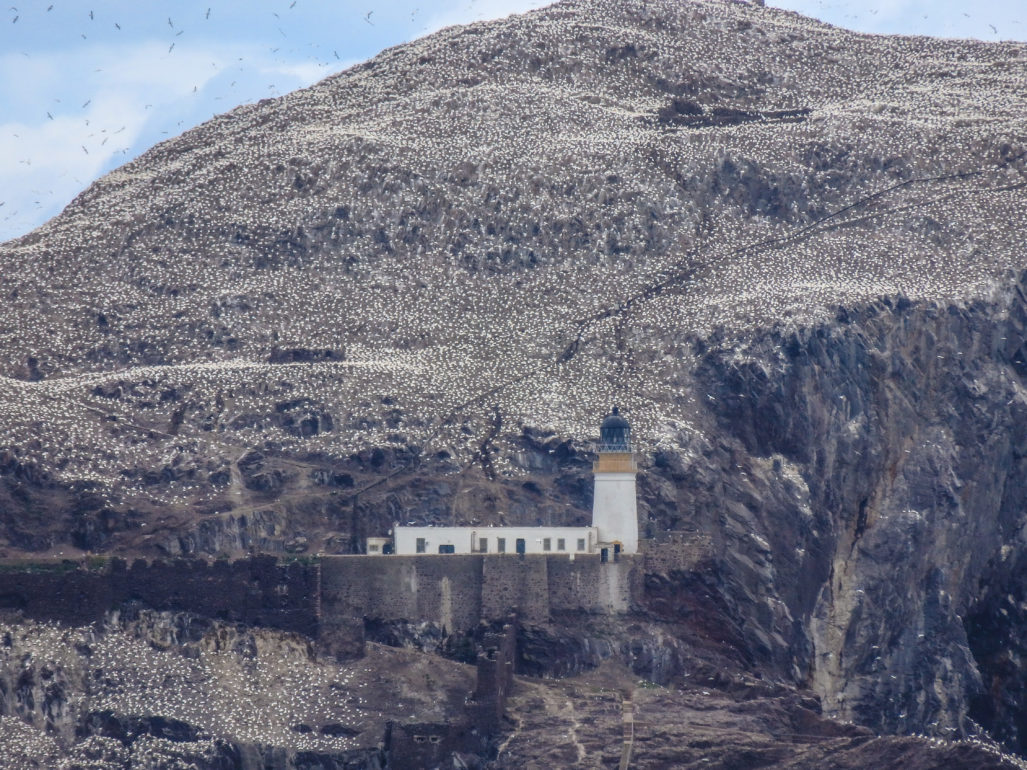 East Lothian has 30 castles, from the dramatic Tantallon Castle which towers over Bass Rock. Tantallon Castle is great fun to explore and has fantastic views out to sea and Bass Rock. The best view of the castle is actually on the way to Seacliff Beach – take the turn on the bend at Auldhame and drive towards the coast, the view across the water is simply stunning!

Visited Tantallon? Find the hidden Hailes Castle with its connections to Mary Queen of Scots, Dirleton Castle which is the most intact castle in East Lothian and the tiny remains of Dunbar Castle overlooking the harbour, the least. Tantallon, Hailes and Dirleton are all managed by Historic Environment Scotland, and cost £5.50 for adults, free for members. 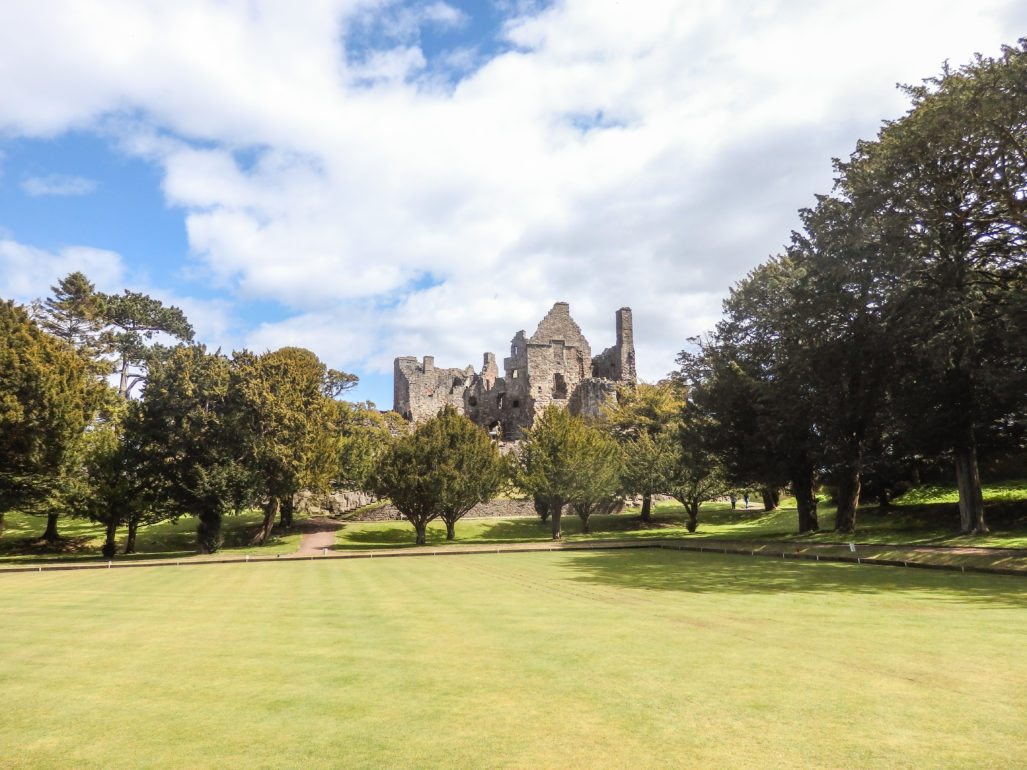 There are now only three working distilleries in the Lowlands, with the most southerly, Glenkinchie, being located in Pencaitland, East Lothian. Also known as the ‘Edinburgh malt’ it’s light soft taste comes from water from the nearby Lammermuir Hills. Tours of the distillery start at £3 with a single malt, or £12 for a tutored tasting of whisky from around Scotland.

Stately home fans are spoilt for choice in East Lothian; home to the stunning Gosford House, Newhailes and Lennoxlove House, as well as the beautiful Inveresk Lodge Garden. Tours of Lennoxlove, owned by the Duke of Hamilton are £7.50, Gosford House has open days throughout the summer, for £6, and Inveresk Lodge and Newhailes are managed by the NTS. 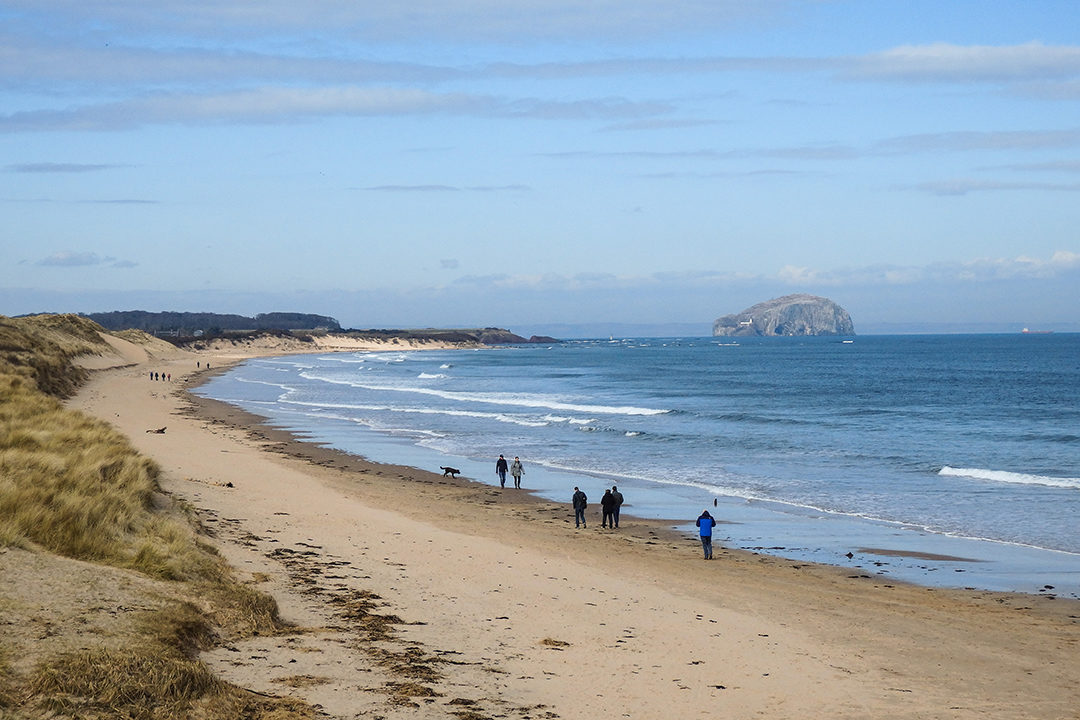 Everyone falls in love with East Lothian’s beaches. My favourite is Seacliff with its tiny harbour and looming castle, although a close second is Tyninghame for views of Bass Rock and the surfers and Yellowcraigs for tales of treasure on Fidra Lighthouse. You can also find the bridge to nowhere at Belhaven Bay, or try horse riding on the huge sands at Gullane… you will soon discover a favourite too.

Located on the edge of the Lammermuir Hills in East Lothian, Blinkbonny Wood campsite might be no frills but it is as blissful as you can get. There are no showers, no drinking water, no electricity; you need to bring everything yourself. However, fires are practically encouraged (there are not that many campsites in Scotland that allow fires – and logs from the wood are only £2.50 a bag), it is a pet friendly campsite and camping is a bargain at just £6 a night (minimum £10  per pitch) with kids under twelve just £1!

14/ Hike in the Lammermuir Hills

Hike up Lammer Law and Hopes Reservoir, for views north to East Lothian, North Berwick Law and Bass Rock – and from the top across to Edinburgh. If you are feeling fit, a 7-mile loop will take you past Hopes Reservoir and back through Longyester to the campsite. The best time to visit the Lammermuirs is at the start of Autumn as the heather is just turning purple and the light seems to fall perfectly on the rolling hills… 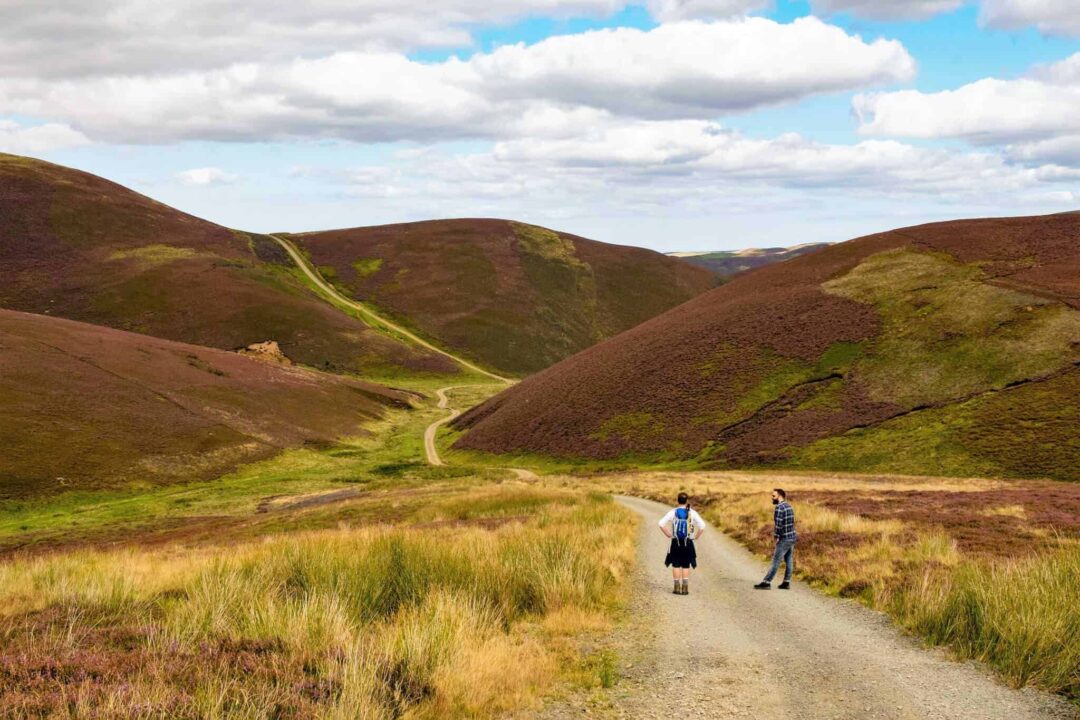 Getting to East Lothian from Edinburgh

By Car – Take the A1 to Longniddry and then the signposted coastal route via Aberlady, Gullane and Dirleton to North Berwick. Return by continuing to past Tantallon Castle, Tyninghame and returning via the A1.

Train – Direct to Longniddry or to North Berwick.

More things to do in East Lothian

a lot of great things to do! I have to finish watching the Outlander:))