My parents recently took a trip to north-west Italy, to visit Chiavari, near Genoa, where my mum’s father was held as a prisoner of war during WWII. Growing up I had known little about my grandfather’s time as a soldier, or as a prisoner of war. Doing the research for my parent’s trip was fascinating, as is the reason behind their visit.

My grandfather, Horace Wade was 27 years old when he became a trooper in the 6th Royal Tank Regiment (Corps). The 6th RTR, based in Libya, took part in ‘Operation Battleaxe’ on the 15th June 1941, a disastrous operation for the British troops, with Rommel’s 88mm guns destroying half of the British tanks at Hell Fire’s pass.  Trooper H Wade was recorded as one of those missing, believed killed in action. However, he’d survived. Another soldier described the moment as a great flash of flame coming through the tank turret and the “Come out! For you, the war is over” request. My grandfather was a P.O.W.

From Libya the P.O.Ws were transported north to Italy, to work camps spread throughout the country. My grandfather’s home for the next 2 years was to be ‘Campo 52’ by the village of Pian de Coreglia, Chiavari in the North-West. Between early 1941 and July 1944 when the camp was liberated, Campo 52 would house in total over 15,000 English, New Zealand and South African P.O.Ws.

The prisoners held with my grandfather at Campo 52 slept in bunk beds in 44 wooden barracks, and had a refectory, library, infirmary and a theatre. Food supplies, managed by the Red Cross were intermittent and prisoners were often left hungry – cigarettes and alcohol were much valued as a bartering tool for additional rations. 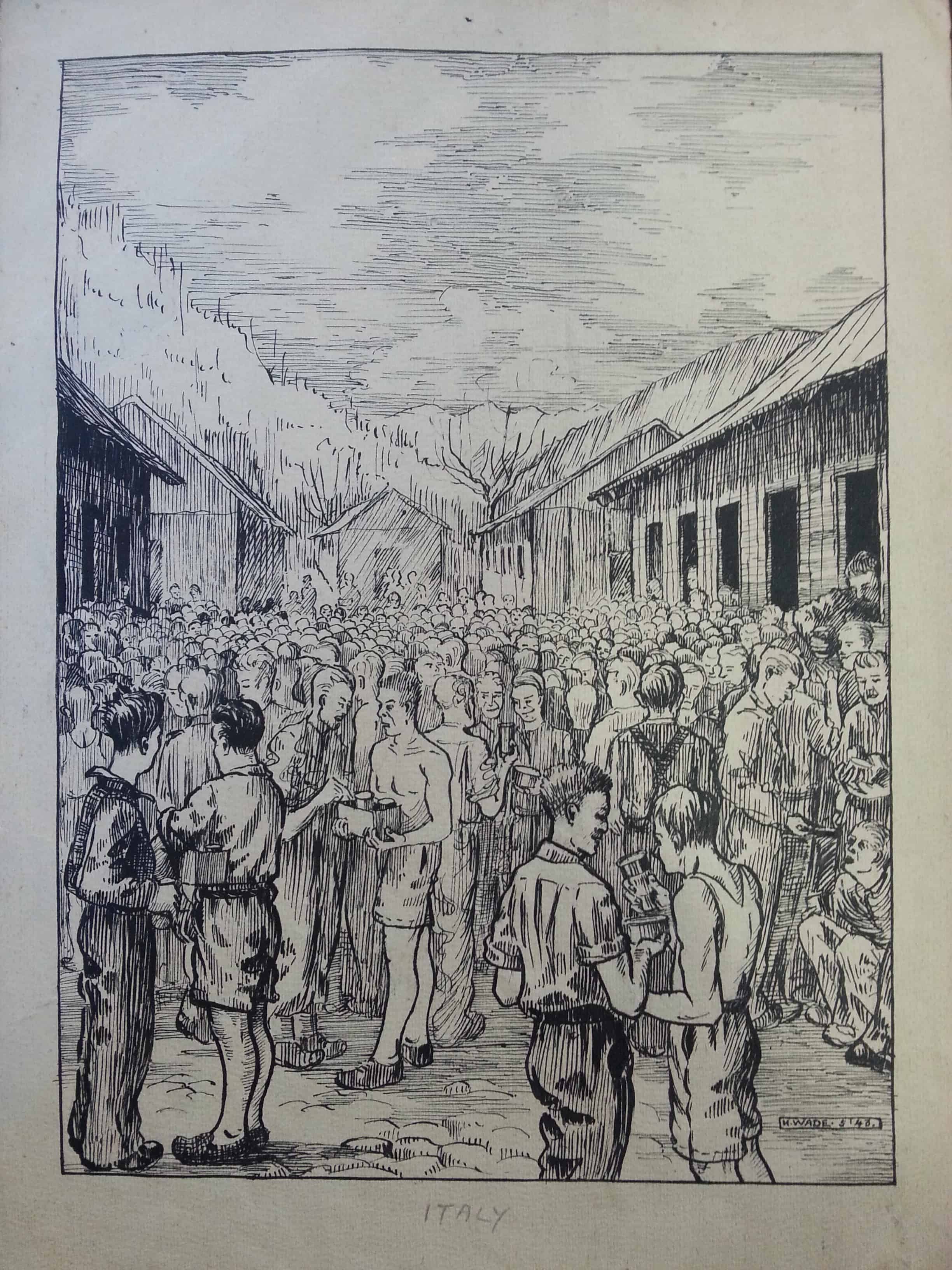 War diaries of P.O.Ws during WWII tell of workcamp life being at best, rather mundane but my grandfather was able to spend some of his time painting and drawing camp life. Over 3 years as a P.O.W he produced over 70 paintings and sketches, most  of which are now in the archives of the museum of the Royal Tank Regiment at Bovington, Dorset. 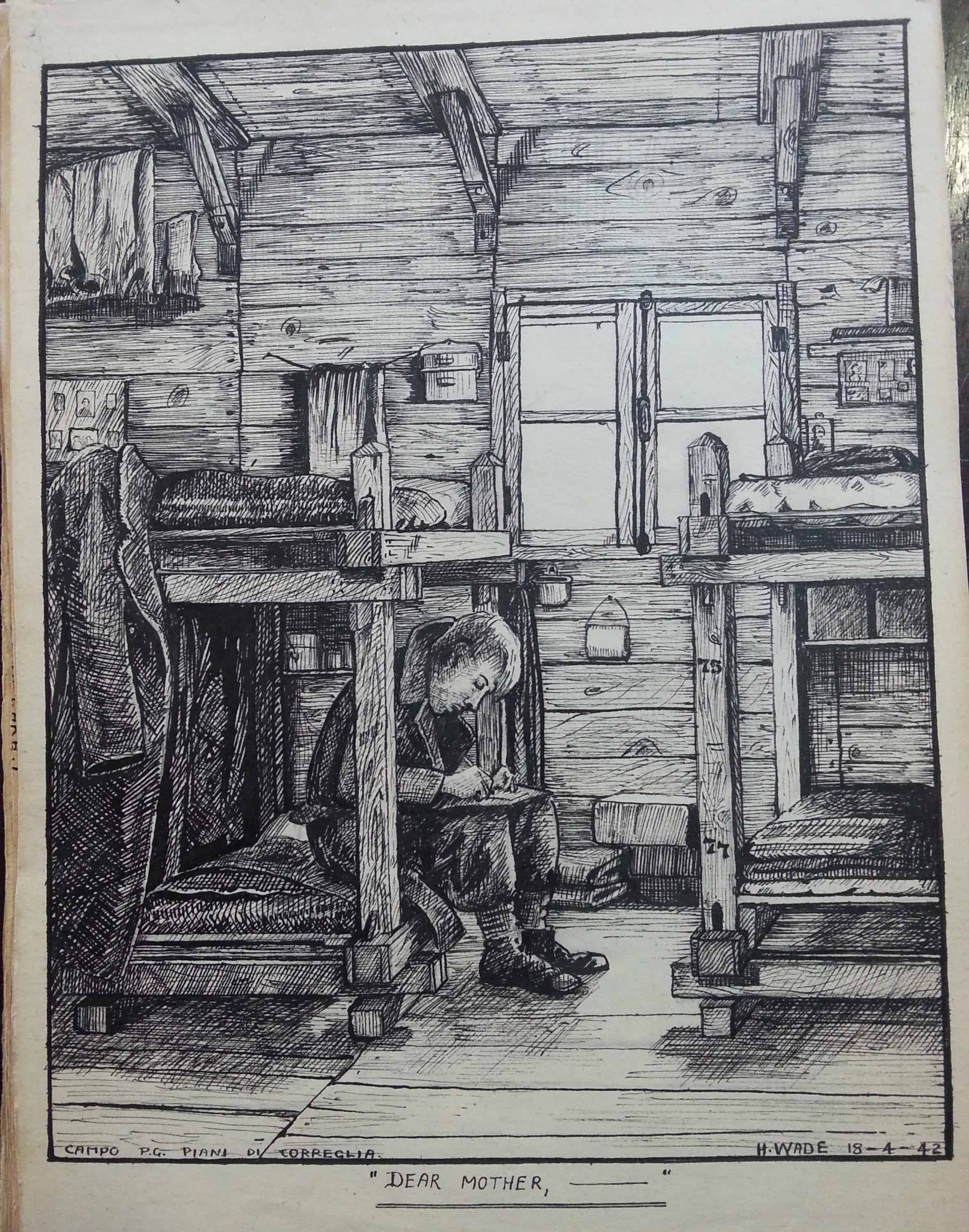 His paintings are both evocative and light hearted. They include fellow prisoners reading in their bunks, receiving letters from home, and putting on Pygmalion in the camp theatre, with one sergeant looking rather fetching dressed as Eliza Doolittle. Then there are those that bring to life the reality of living behind the wire. 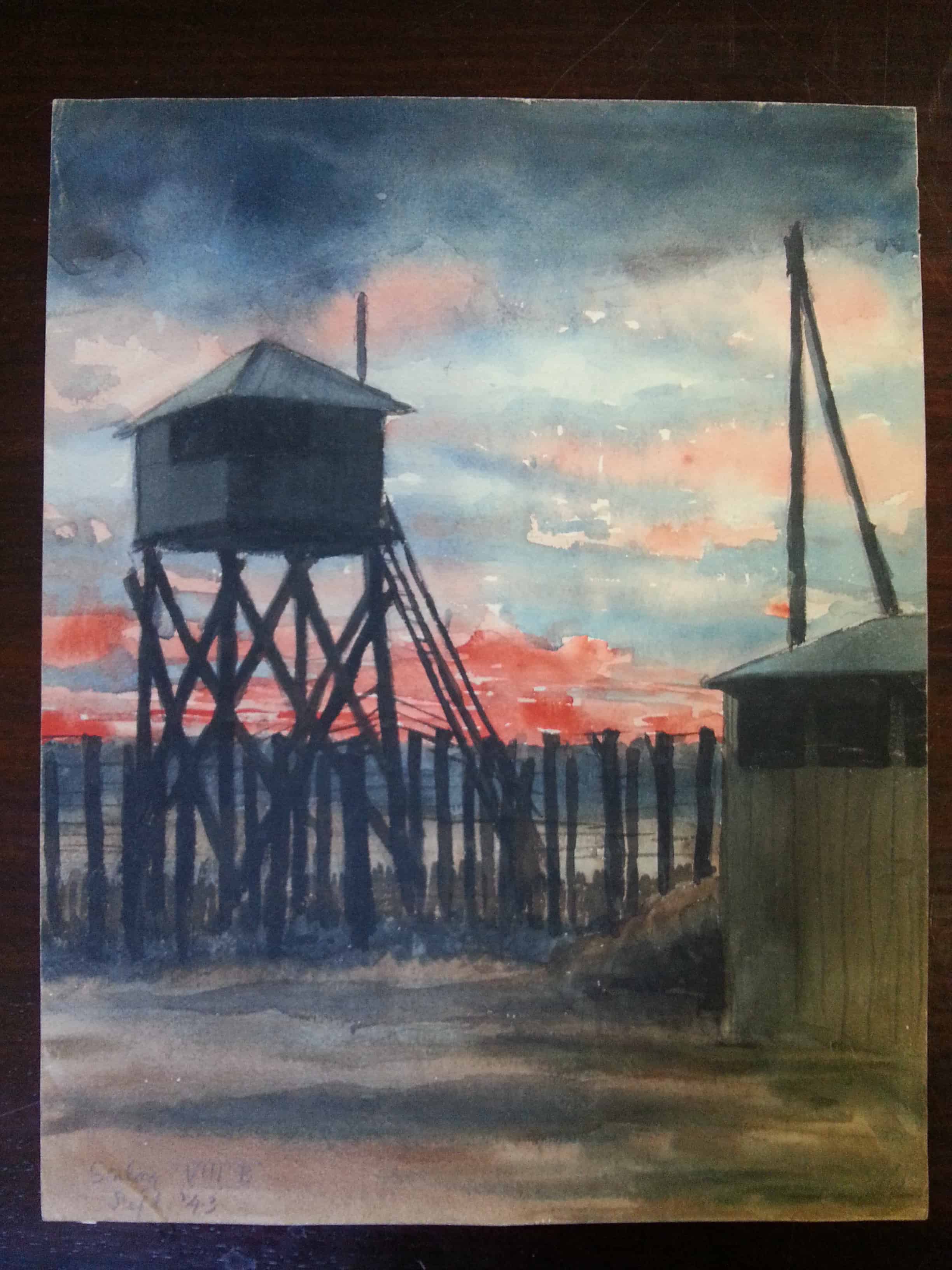 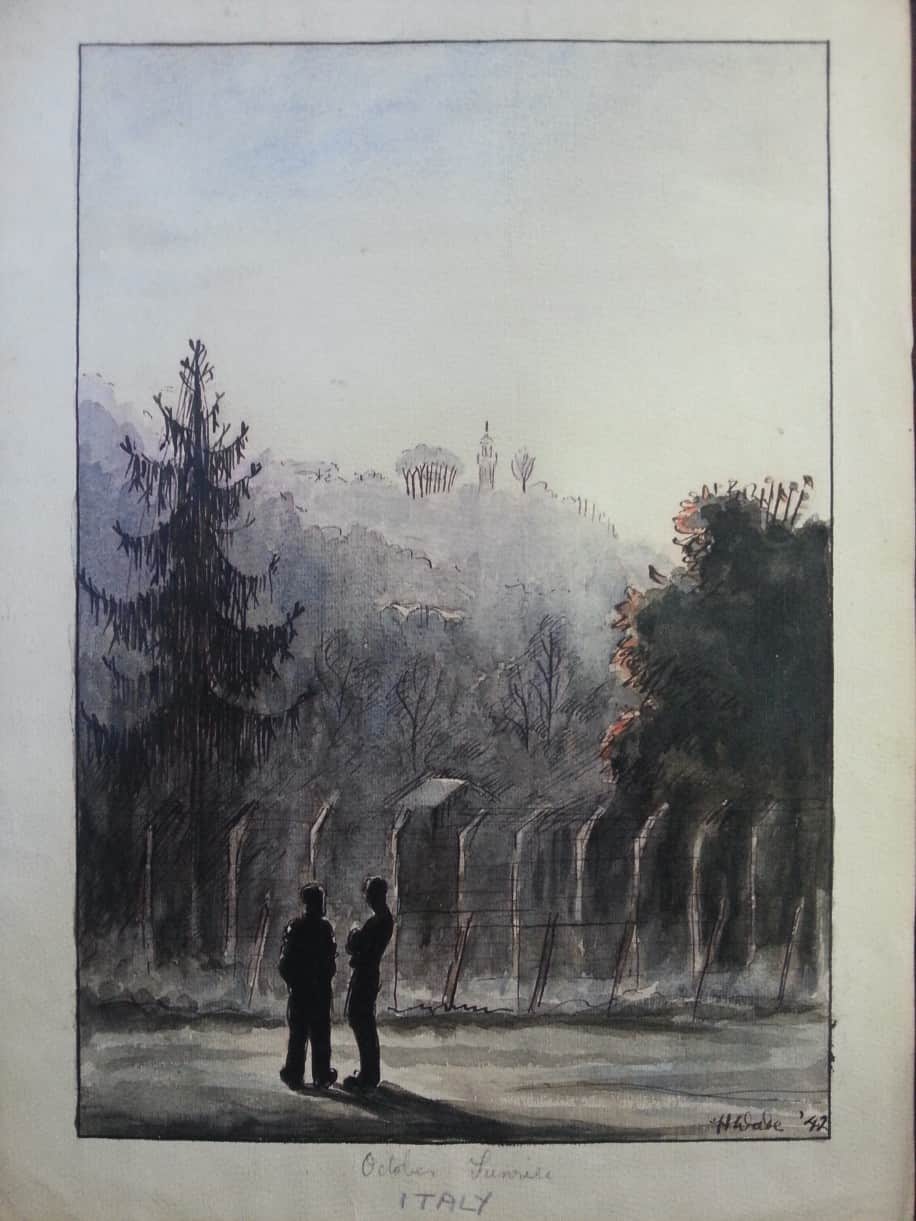 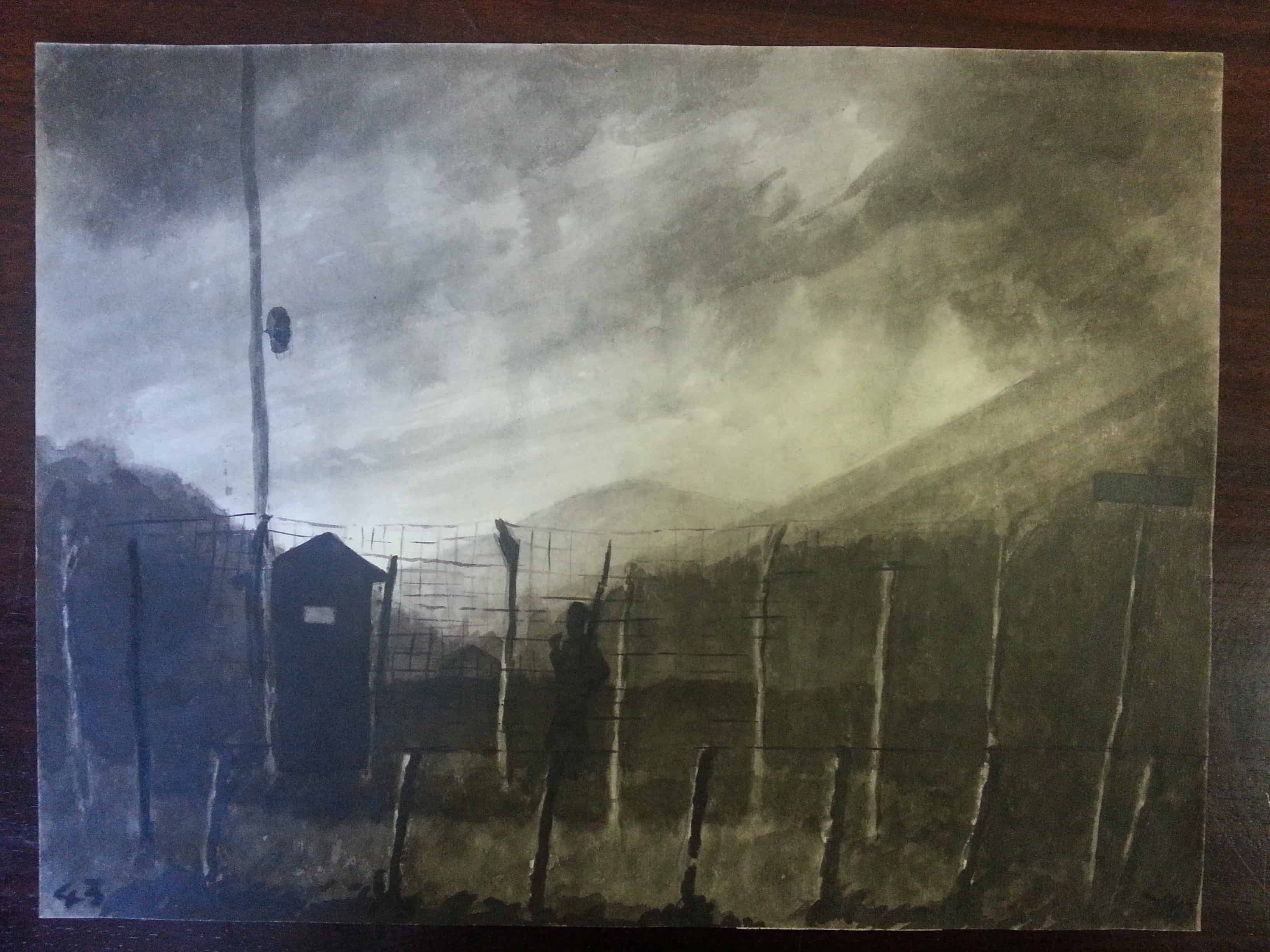 After about 2 years in Italy, he was transferred to Upper Silesia in Nazi Germany, which is currently in southern Poland, to work down the mines.  Here my grandfather painted the grim faces of men waiting for the ‘cage’ to take them down the mines and the darkness of the tunnels. It was a hard and dangerous life, one which would see him have his left leg crushed in a mining accident which resulted in him having his lower limb amputated. 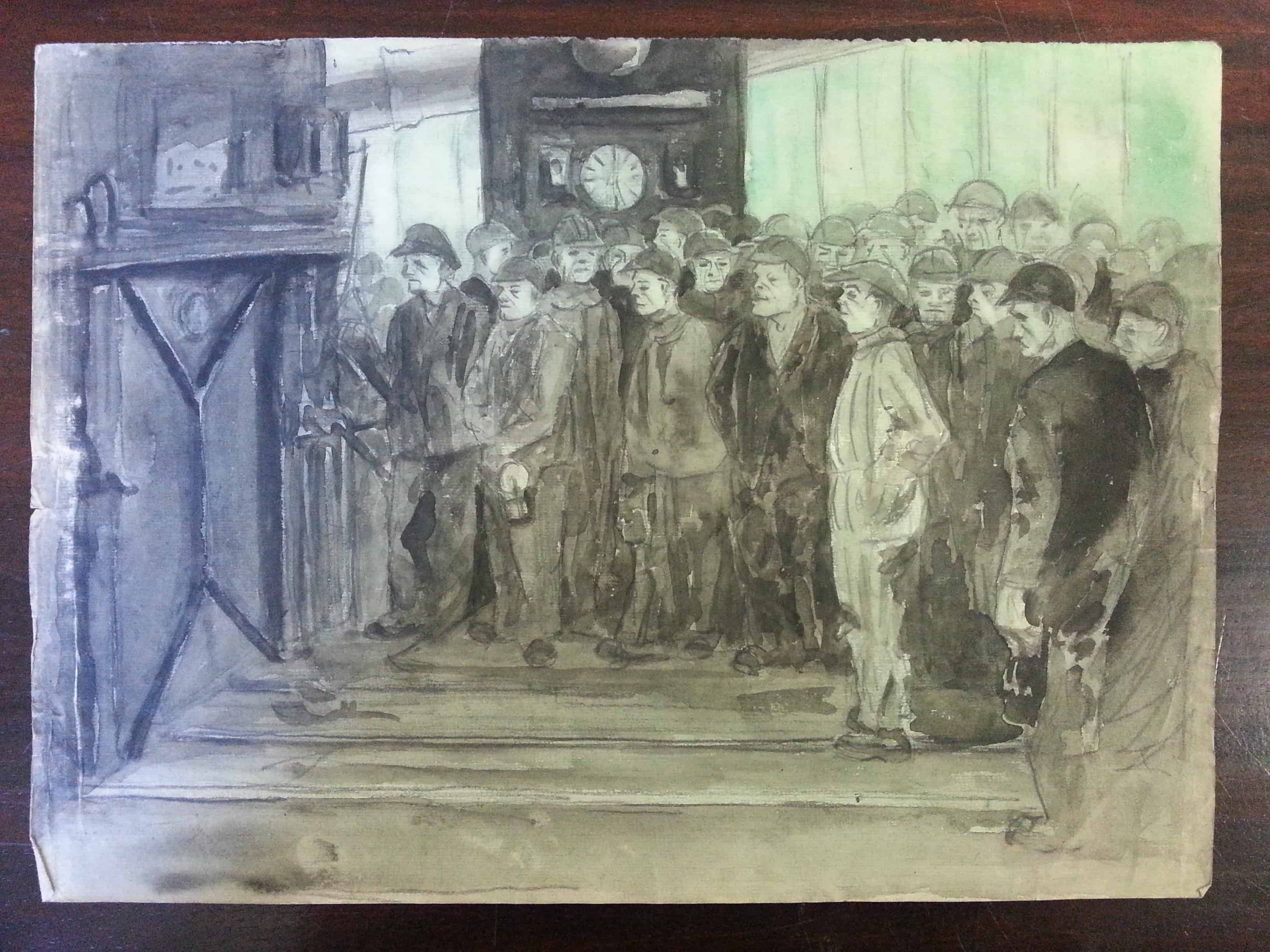 Whilst many of his paintings are of camp life, he also painted the landscape, the buildings and the beauty of Italy. All that is now left of Campo 52 is a commemorative plaque on a bridge next to where the camp had been, but my mother hoped that the buildings and landscapes he painted might remain. 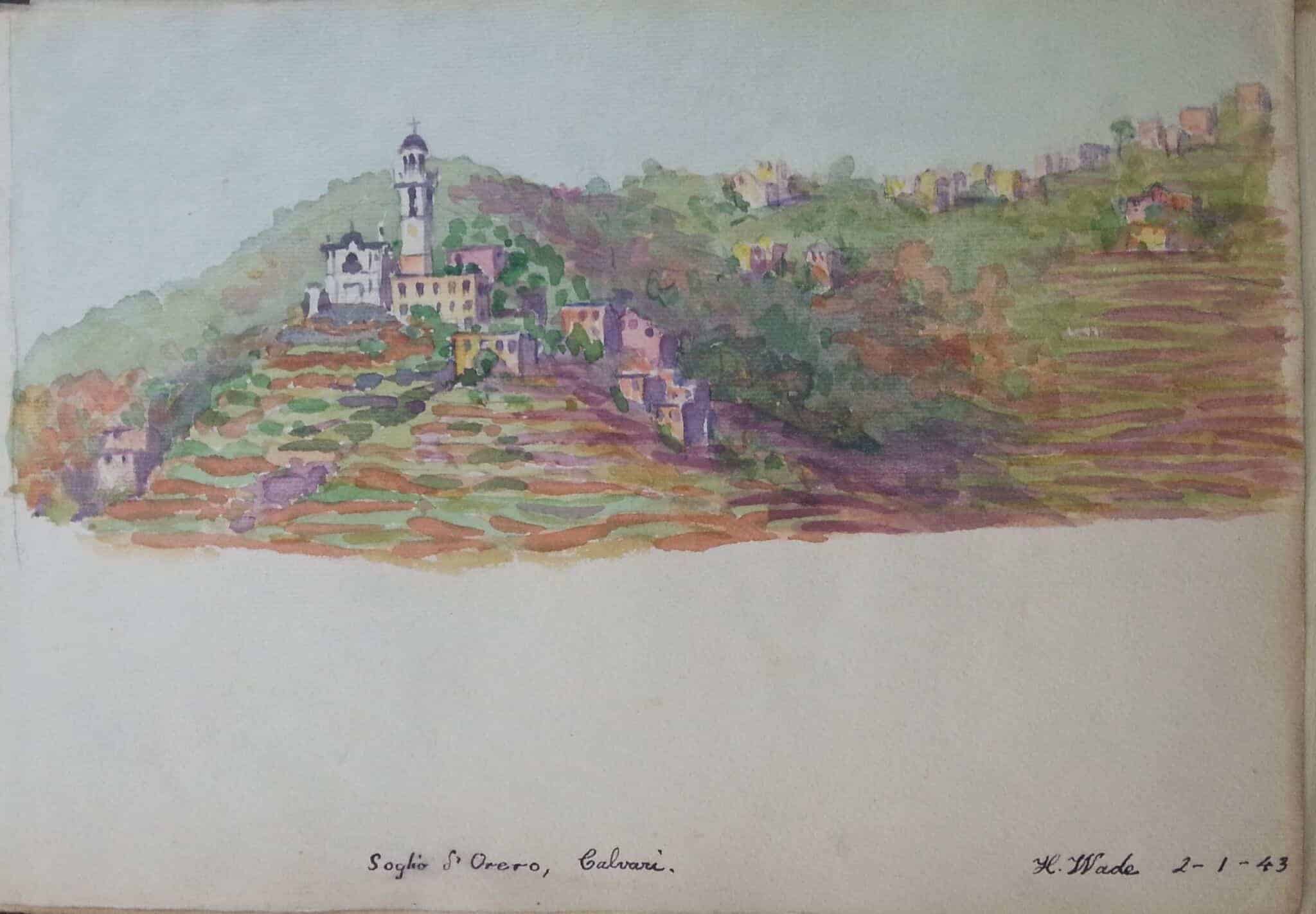 73 years after my grandfather painted Pian de Coreglia’s tiny village church, the dramatic basilica, il Santuario di Mont Allegro in nearby Rapallo and the Soglio d’Orero, a church high up on a hill opposite the camp, my parents decided to visit, to see his paintings in real life and to get a sense of what he endured. 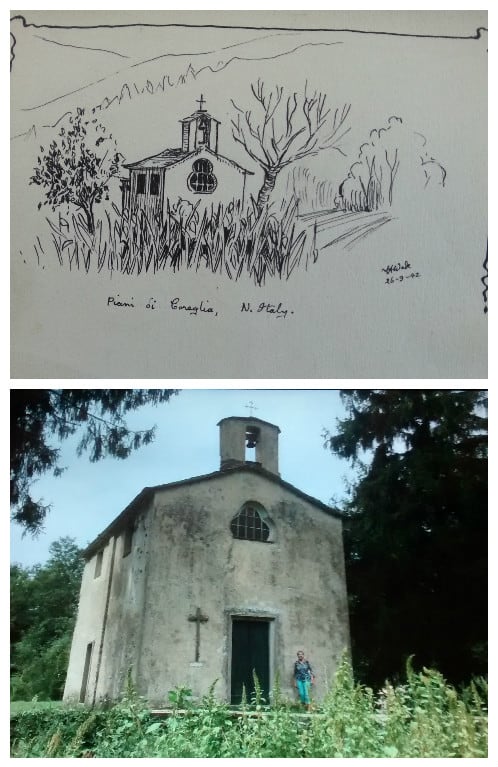 Thanks to my grandfather and his paintings we will never have to forget. 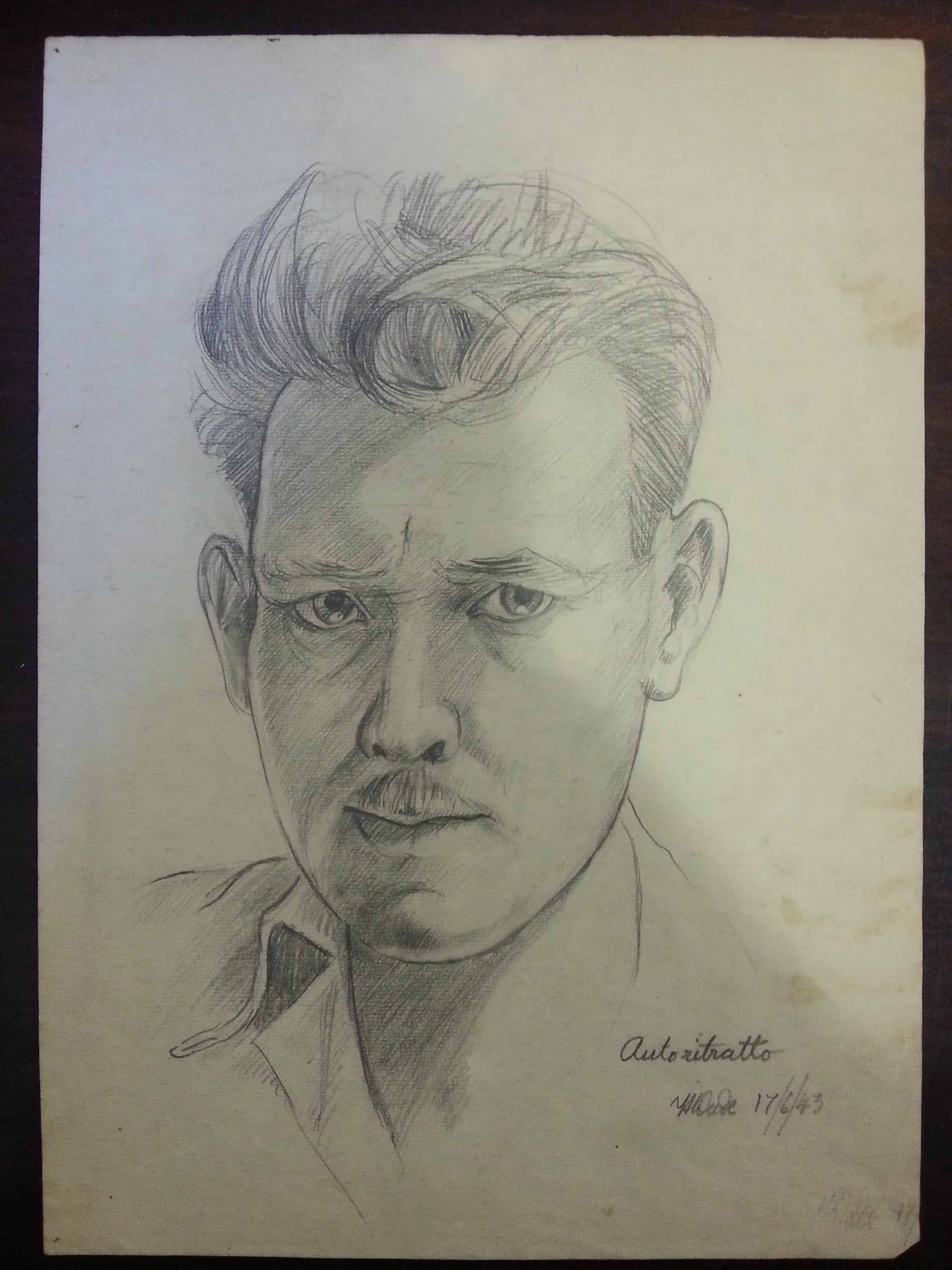 Thank you for writing this account. I can't find your name on the page, which I would be grateful to know as I'd like to reference your grandfather's drawings in my forthcoming memoir.

I am researching my father's time in 5 different POW camps - three in Italy, including Chiavari, and two Stalags in Germany. Did your grandfather talk much about his time there? And were the different nationalities mixed together?

A wonderful account. Thankyou for sharing. I note that your grandfather was there after Operation Battleaxe. My father was captured at the end of Operation Crusader and found his way to Campo 52 after a stint in Garian and Campo 66. He moved from 52 to 57 before also finding his way to a Polish coal mine when Italy surrendered in September 1943.

Just hit on your site. Very interesting to see much information you were able to get and record. My Step Father was also there at Camp 53 till the end of the war. He was Douglas Vickery from Yeovil in Somerset and in Lybia with the Royal Army Service Corps as a driver. Don't know how long he was in the camp. Always remember him telling me his hair was shaved off hence he had a good head of hair in old age. Also when the Italian guards left the camp they broke out. They were skin and bone and started to live off the land so when they get home all their Families were surprised how well they looked. Thank you for the information you have shared. Best regards, Phill.

Thank you for posting this. My grandfather Constant Galvan was captured at Sidi Rezegh. He enlisted at 16 years of age, lying about his age. He spent 22 months as a POW in Rome Cables POW, Campo 52 and Campo 107 before escaping and spending 18 weeks on the run before meeting up with allied in Italy. Thank you for these images and paintings.

Hi I found Kate's site back in 2016 when we were travelling through Italy and Germany visiting the sites of the PIW camps where my kiwi Uncle was.(his details are in my 2016 posts above) We are back in UK on holiday and 2 weeks ago I spent a wonderful morning at the Bovington Tank Museum viewing all of Horace Wade's watercolours and his sketchbooks-what priviledge to be able to see them all. They provide such a personal insight into POW life in PG 52 then in Gernany Kind regards Karen