Welcome to Aberdeen – the Silver City

With quirky villages, street art, dolphins and fine food, Aberdeen should be on your radar for your next visit to Scotland.

If you were asked to describe Aberdeen, you’d probably think of granite buildings, the oil industry and probably Aberdeen Angus steak – but Aberdeen as a tourist destination to rival Edinburgh or Glasgow? Maybe not. However, with the Nuart Street Art Festival changing the face of the city centre, Footdee’s quirky tarry sheds becoming Instagram stars, and dolphins swimming right up to its doorstep – Aberdeen has discovered a buoyant and well-deserved pride in itself. Here is why you should visit Aberdeen.

Short on time? My favourite things to do in Aberdeen:

This is a paid partnership with VisitAberdeenshire

3 things to know before you go to Aberdeen…

Things to do in Aberdeen Map

A visit to Aberdeen is best split into three areas – from north to south – Old Aberdeen, the city centre, and Footdee and Aberdeen Harbour.

1 / Things to do in Old Aberdeen

Old Aberdeen is a wee piece of history hidden amongst the bustling modern city which surrounds it. Once a separate burgh, a visit to Old Aberdeen takes you right back in time to when Aberdeen was just a small settlement on the River Don.

Now home to the University of Aberdeen, stroll up Old Aberdeen’s High Street to visit the St Machar’s Cathedral, wander around the medieval King’s College Chapel, and linger in the beautiful Cruickshank Botanic Garden. My favourite corner of Old Aberdeen is the cute cottages on Wrights and Coopers Place – the Wrights and Coopers were joiners and two of the seven incorporated trades of Aberdeen. At the end of the cottages is the pretty MacRobert Memorial Garden, a war memorial to Lady MacRobert, a long term benefactor to and supporter of Aberdeen University.

Formerly the Bridge of Don, the Brig o’ Balgownie is Aberdeen’s oldest bridge at nearly 700 years old – it was thought the bridge was built to carry Robert the Bruce’s troops over the River Don. The village which surrounds the bridge is one of the prettiest parts of Aberdeen, a small hamlet row of cottages with beautiful gardens – and that all-important Sakura blossom. Follow the path along the river from the Brig o’Balgownie to the Donmouth Nature Reserve.

On Old Aberdeen’s High Street is rather unusual Powis Gate, which was once the entrance to Powis House owned by Hugh Fraser Leslie of Powis, a large Aberdonian landowner. The Powis Gate commemorates the freeing of Jamaican slaves owned by the Powis Estate. The huge gates are rather incongruous amongst the tiny medieval cottages, but stunning all the same.

2 / Thing to do in Aberdeen City Centre

Focused around Union Street and the Union Square Shopping Centre, the modern parts of Aberdeen are built around a walkable and compact city centre. Like to shop? The best boutiques can be found on the streets leading of Union Street – try Thistle Street for from fashion and jewellery, Belmont Street for Books and Beans and the retro Belmont Filmhouse, Netherkirkgate for tiny startups, and descend the steps to The Green for cafes, cute dogs, tattoos and street art. Here’s what else you should get up in Aberdeen City Centre.

The buildings in Aberdeen’s granite city centre might sparkle in the sunshine but brightening things up, even more, is Nuart, Aberdeen’s street art festival. Running since 2017, the Nuart Festival is in partnership with from Aberdeen’s twin city, Stavanger in Norway where the festival originated.

Boasting artworks from SmugOne (famous for the St Mungo mural in Glasgow) Jan Vormann’s lego walls and Herakut on The Green, Ernest Zacharevic’s giant seagulls, and Nimi and RH74’s green lady, you can find all the street art on Nuart’s Aberdeen street art map. Aberdeen’s street art now gives Glasgow a run for its money.

However, Art in Aberdeen is not all about big pieces – you will also spot miniature artworks all over the city – try and find Darth, Yoda and Princess Leia in one of Aberdeen’s laneways. Also brightening up the city is the Painted Doors project which sees Aberdeen’s doorways turned into works of art – more are popping up all the time. You can find all the doors on this Painted Doors map.

Marischal College is probably Aberdeen’s most iconic building and the second-largest granite building in the world (the biggest is Monasterio del Escorial, once home to the King of Spain) it was built to house Aberdeen University and is now Aberdeen Council’s offices.

A mix of gothic and austere architecture styles, Marischal College was built between 1835 and 1906 and renovated back to its sparkly silver glory in 2011. On a sunny day, Marischal College sparkles – this is due to the local granite containing a lot of mica – a shiny silicate mineral. Aberdeen granite also built the Forth Rail Bridge, Waterloo Bridge and the Terraces of the House of Parliament.

Housed in a higgledy-piggledy set of buildings on the waterfront, the Aberdeen Maritime Museum tells the story of Aberdeen’s relationship with the North Sea – from fishing, fast sailing boats to the oil platforms the city now serves.

My favourite part of the museum was the story of Thermopylae. Launched in 1868 from Aberdeen, the Thermopylae was the fastest sailing boat ever made, no boat has yet broken its speed record from the UK to Australia in just 63 days. The Maritime Museum is free entry.

More museums in Aberdeen to visit:

Provost Skene’s House is one of Aberdeen city centre’s oldest buildings. Built in 1545, the house is now a museum showing how people lived in the 17th, 18th and early 19th centuries and boast impressive painted ceilings. The house is currently closed to visitors, but the exterior is worth a visit.

Next door to Provost Skene’s House is the new Marischal Square, home to Mackie’s Ice Cream and Poised a sculpture by famous Scottish sculptor Andy Scott – you will know him best for the Kelpies at Falkirk. Leopards have long formed part of Aberdeen’s heraldry – two leopards were once gifted to the city by King James I after the city underwrote the expense of his stay in captivity in England. You can spot more leopards on Union Bridge on Union Street and on Aberdeen’s coat of arms. No one is really sure whether the leopards were actually real.

3 / Things to do in Aberdeen Harbour

Carrying 5 million tons of cargo, North Link ferries to Shetland and home to huge boats heading out to the oil platforms, you can’t miss Aberdeen’s harbour on the River Dee. Hiding amongst the industry are bottlenose dolphins, quirky fishermen’s cottages and a rather excellent seafood restaurant. Let’s explore Aberdeen’s harbour.

The fishing village of Footdee is one of Scotland’s wee hidden gems. Designed by Aberdeen architect John Brown in 1809 to house Aberdeen’s fishermen, Footdee is a pretty village of ‘butt and ben’ cottages set around two inner squares.

My favourite part of Footdee are the cottage’s quirky Tarry Sheds which were added in the 19th century, as drying shed for fishing nets and as outhouses – Footdee originally had no running water and you can still see the old colourful water fountains all over the town. The sheds are now mostly used as summer houses.

Locally Footdee is also called Fittie – the names of the village are uncertain, either coming from the Church of St Fittick half a mile away or from the ‘Foot’ or mouth of the River Dee, or in Doric, the ‘Fit’ of the Dee – hence Fittie!

Did you know that Aberdeen is one of the best places in Europe to see Dolphins? There are usually around 20 dolphins in Aberdeen harbour (we spotted four in just 10 minutes) but you can see up to 50 – along with babies!  The best place to watch the dolphins is from the Torry Battery and Girdleness Lighthouse.

The best time to see dolphins is in the afternoon and on an incoming/rising tide which brings in the food for the dolphins – the dolphins in Aberdeen harbour eat both salmon from the Dee and saltwater catch – no wonder they are some of the biggest dolphins in Europe! RSPB staff and volunteers provide information on the Aberdeen dolphins from Thursday to Sunday at the Torry Battery from 11am-6pm – they even have binoculars for you to borrow.

You can also watch the dolphins as you dine on Michelin recommended fish at the Silver Darling Restaurant at Porca Quay. Did you know a ‘silver darling’ is actually a herring?

When to visit Aberdeen

Aberdeen is known as Scotland’s sunniest city (although this is disputed by Dundee) and on a good day in Scotland, the cities buildings just sparkle. I always recommend visiting Scotland in the shoulder season – April, May and September are often our best months weather-wise. If you want to see the sakura blossoms in Old Aberdeen then visit in May. Aberdeen also has 9 festivals throughout the year which might help you choose when to visit. Here are my favourites:

Where to stay in Aberdeen

How to get to Aberdeen

Where to eat in Aberdeen

….and finally, don’t miss trying an Aberdeen Rowie / Buttery. Made originally for sailors, a buttery is kind of like a croissant if it were made with lard and salt (it kept them moist at sea) a rowie is now often eaten as an breakfast treat – try them with raspberry jam. How do you eat your rowie?

Dolphins, quirky fishing villages & some of the best fish i’ve eaten in a long time… Aberdeen, you are a bonnie haddie! 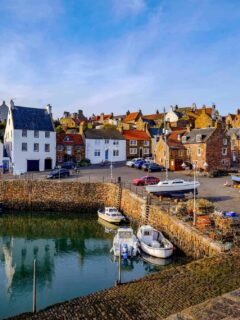 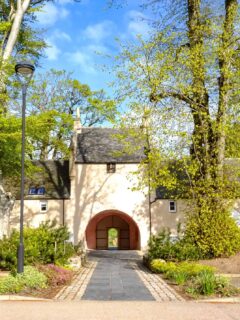 Ooooh, I have to admit I'm not the biggest fan of Aberdeen, but all this street art looks interesting!! I love SmugOne's work. Those painted doors are amazing, too! I'll have to have a hunt for them all next time I'm there.