Beyond Nessie, how to explore Fort Augustus and the real Loch Ness 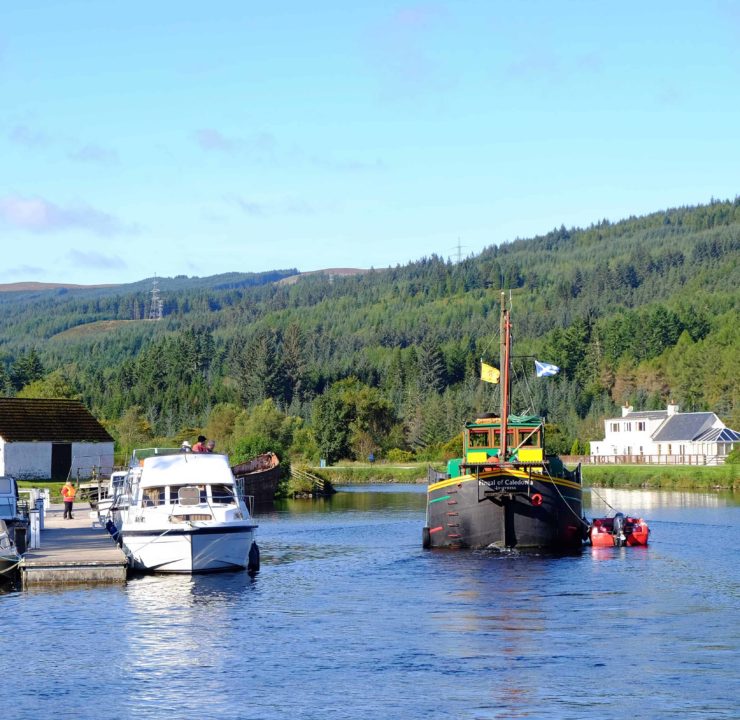 Beyond the day-tripping tour buses and hoards of selfie-taking Nessie fans, lies a beautiful loch waiting to be discovered. With its location halfway up Scotland’s famous 62-mile ‘Great Glen’, the spectacular Urquhart Castle and the Caledonian Canal there aren’t many more places in Scotland more iconic than Loch Ness. Here are my favourite things to do at Loch Ness and Fort Augustus.

A monster myth. A loch with uncharted depths. Loch Ness is a Scottish landmark, famous across the world, no wonder thousands of people a year visit. Whether you want to visit Urquhart Castle, take a boat trip out on the loch, or stop for a stroll on the shore, beyond the myths and legends is one of Scotland’s most beautiful landscapes waiting to be explored.

Loch Ness sits within Scotland’s spectacular Great Glen which stretches coast to coast from Fort William beneath the mighty Ben Nevis, through the maelstrom of the Fort Augustus Locks, across the huge expanse of Loch Ness up to Inverness, taking in some of Scotland’s most special scenery along the way. Through the glen stretches the 62-mile Caledonian Canal navigable by canal and sailing boat – one of the world’s best waterways. Here is how to visit Loch Ness.

The best things to do at Loch Ness and Fort Augustus

Where to stay at Loch Ness

The Lovat, Fort Augustus – once a large station hotel serving a long-gone rail line from Spean Bridge, The Lovat Loch Ness* is a family-run gem of a hotel with four-star facilities and a restaurant that puts out delicious food. With 28 rooms ranging from loch front suites to pet-friendly lodges, big on facilities and beautifully decorated in modern muted and tweedy tones.

Loch Ness Shores, Foyers – a 5-star campsite (they even have underfloor heating in the showers!) on the wild south bank of Loch Ness. With an on-site farm shop and wifi, Loch Ness Shores is a campsite for those who like a bit of luxury with their tents. Paths run directly down to the banks of the loch where you can build a fire and keep an eye out for Nessie.

Eagle Brae, Beauly – If you are looking for true luxury accommodation and peace and quiet in the Scottish highlands, then stay at Eagle Brae, a small and exclusive village of 10 beautiful self-catering cedar log cabins. Hidden deep in Inverness-shire, close to Glen Affric, Scotland’s most beautiful glen and just 1 hour from busy Loch Ness and Fort Augustus.

A selection of my favourite AirBnB’s near Loch Ness.

The need to know before you visit Loch Ness

Is there really a Loch Ness Monster?

The Loch Ness Monster is a national treasure – and don’t let anyone tell you she isn’t real. This year marks the 84th anniversary of the famous Surgeon’s Photograph. Gossip is that the photo is actually of a toy submarine purchased from Woolworths with a fake Nessie head!

How deep is Loch Ness?

Loch Ness’s deepest point is thought to be 755 feet (126 fathoms; 230 metres) but sonar readings have possibly discovered a chasm points up to 900 feet (270 meters) which is deeper than the North Sea – a hiding place for Nessie maybe?

By volume, Loch Ness is the biggest Loch in Scotland at 23 miles, 36km in length and 56.4 km² in area. Loch Ness holds an estimated 263 billion cubic feet of water – so big it contains more water than all the lakes in England and Wales combined! Unlike most lochs in Scotland, Loch Ness is so big, that it never freezes over.

How was Loch Ness formed?

The Great Glen in which Loch Ness sits is a huge geological fault line dividing Scotland in two. Yes, the kind of fault line which causes earthquakes! Erosion along this fault line created the lochs within the Great Glen including Loch Ness. There are still small earthquakes recorded in the glen each year, and the Kessock Bridge leaving Inverness is built with seismic buffers!

Whether you have a weekend, or a week to spend exploring Loch Ness, here is what you can get up to.

Loch Ness Map of things to do

Things to do at Fort Augustus and Loch Ness

Want to know more about Loch Ness or just shelter from the rain? Visit one of the Loch Ness visitor centres:

Where else in Scotland offers up the odd sight of hundreds of people watching sailing boats and cruisers traversing down five canal locks and out onto a loch? The pretty village of Fort Augustus is one of my favourite places in Scotland, and is a bust village filled with enjoying cruises on the Caledonian Canal and Loch Ness.

Fort Augustus was once home to both the British army and Benedictine monks in the huge Abbey that sits on the edge of the Loch. Did you know that Fort Augustus was also a casualty of the Jacobite uprising?

The village was actually named Cill Chuimein until General Wade built his ‘Fort Augustus’ to stop the Highlanders moving down the Great Glen and renamed the village. The name Cill Chuimein is still reflected in the village’s tiny burial ground on the Cullochy Estate.

Grab lunch at one of the canal-side pubs and cafes and watch the boaters ‘walking’ their boats through the locks. The Lock Inn does great pub grub (fab fish & chips and mac & cheese!) and serves real ale.

Then from Fort Augustus head south to walk a short stretch of the Great Glen Way, a 3 mile round trip to the pretty and remote Kytra Locks. The lock is a great spot for a picnic beside the canal as you watch the boats go past, or for a short walk, explore the village on the Fort Augustus path.

The Caledonian Canal is made up of man-made canal sections, 29 locks and four lochs, including Loch Ness. A loch and a lock might sound the same, but they are very different. Loch is Scottish for lake – and locks are man-made structures designed to take boats up and down steep sections of the canal.

The Canal is navigable by sail and cruiser, and the route is accessible by both by foot and bike.

Read more: How to sail the Caledonian Canal

Urquhart Castle is one of the largest in Scotland, and is deservedly popular – there is even a working trebuchet siege engine in the castle grounds! Entry to the castle is £9 for adults free with an Explorer Pass.

Travelling at 35 mph you scoot up Loch Ness from Fort Augustus to Urquhart Castle stopping occasionally to spot wildlife or (Nessie) and to dodge the fast-moving rain (and hail!) – thankfully you are well wrapped up in cosy suits and goggles. It is a breathtaking thrill-seeking experience and one you won’t forget in a hurry! Ride a RIB: £30 per adult with Cruise Loch Ness

Spot Nessie with the Nessie Hunter

This year marks the 84th anniversary of the famous Surgeon’s Photograph. Gossip is that the photo is actually of a toy submarine purchased from Woolworths with a fake Nessie head.  As ‘Nessie’ sank after the photograph, maybe the sonar equipment might eventually find her in the loch!

At Dores lives Steve Feltham, otherwise known as the Nessie Hunter who has been resident on the shore at Dores on Loch Ness since 1991, mounting a one-man permanent search for the famous monster. You can chat to Steve at Dores, buy one of his famous Nessie replicas and admire the view down to Urquhart Castle is also stunning – which is stunning whatever the weather on Loch Ness!

Close to the Falls of Foyers are the remains of Boleskine House, the home of occultist Aleister Crowley and the house’s spooky graveyard. The house was also owned by Jimmy Page of Led Zeppelin! If you like Outlander, the Boleskine Graveyard is where all the Fraser clan were buried, including a memorial to Lord Simon Lovat, who in the series is Jamie Fraser’s grandfather.

Spot red deer and highland coos at the Lady Falls

Behind the pink Cullochy House, now a private shooting lodge, are the pretty Lady Falls. Look out for red, roe and sika deer in the woods around you as you explore the estate as well a large herd of highland coos!

Visit the Falls of Foyers

The 140ft falls at Foyers have been famous since Victorian times – and inspired verses from Robert Burns and “Scotland’s worst poet” William McGonagall. There is a car park, shop and cafe at the top of the falls. There are well-made but very steep paths down to the viewing platforms for the falls, but there is no disabled access.

Nearby to the Loch Ness at Cannich is the Plodda Falls, a 40-metre high waterfall. Explore the falls and surrounding beautiful Douglas Fir woodlands on a 1-hour Plodda Falls walk.

Climb up the Corrieyairack Pass

The Corrieyairack Pass is a remote pass across the 760m high Monadhliath Mountains from Laggan on the edge of the Cairngorms National Park to Fort Augustus on Loch Ness.

You can now walk or cycle the 25-mile pass along General Wade’s military roads with spectacular views of the Monadhliath Mountains. Short on time? You don’t need to climb far up the pass from the village for an incredible view of Loch Ness and Fort Augustus.

With 22 miles of canal to paddle and 38 miles of lochs, the Great Glen Canoe Trail is a challenging multi-day route including lots of loch gates!

Ready to go to Loch Ness?

Every time I leave Fort Augustus and Loch Ness I leave a little piece of my heart behind. Get behind the scenes of the loch and I am sure you will too… 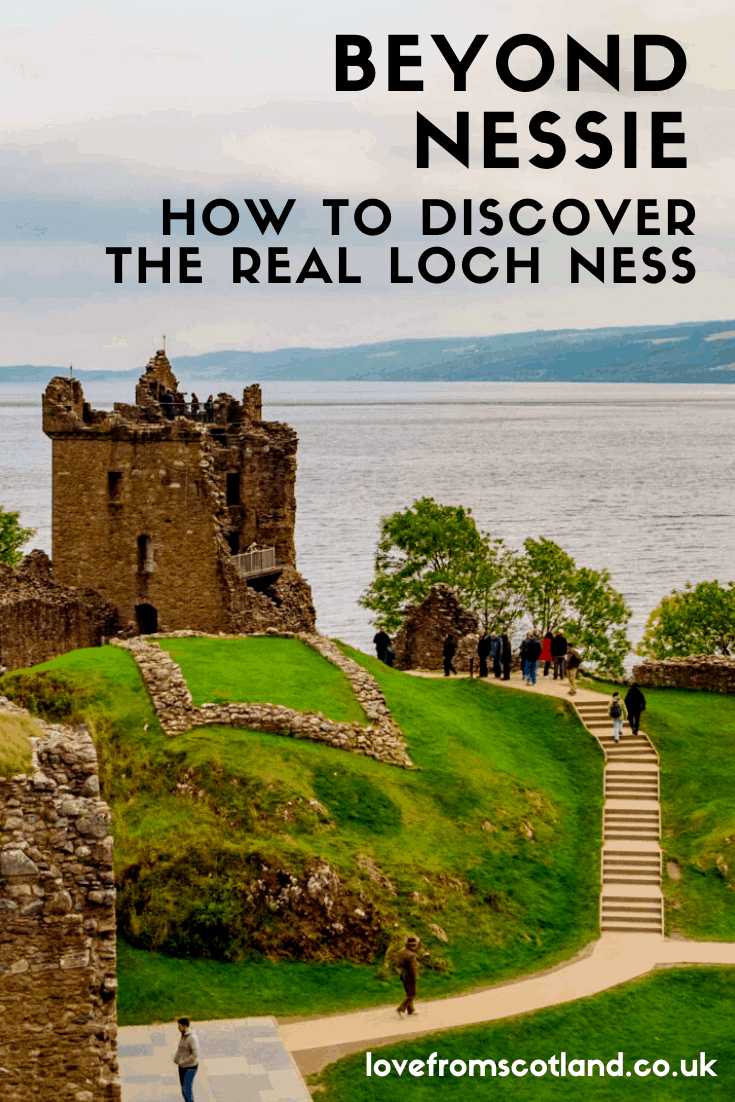 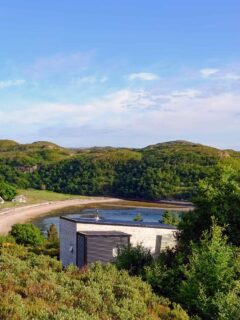 Previous
Get off the grid - gorgeous log cabins in Scotland 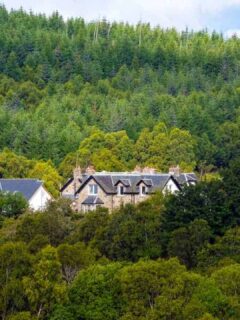